Following the Grand Prix of Japan at Motegi in September, Dani Pedrosa rode 30 laps on the RC212V prototype as the machine was revealed for the first time in public. Though the test was primarily for initial evaluation purposes, Pedrosa managed a highly respectable lap time of 1m 48.210s. Here he gives his thoughts on the bike he and newly-crowned World Champion Nicky Hayden will ride next year.

What are your first impressions of the RC212V prototype?

Its a little bit difficult to make a good analysis of the bike because Ive only had the possibility to ride a few laps. But my first impression is that the bike feels right which is very important when you check the first prototype. We didnt work on the settings – only making some changes to the gearing – but but it was clear that the package feels quite similar to the RC211V.

Can you assess the handling characteristics?

Definitely the bike is smaller, so for me its better because I can control the bike more easily. I could touch my knees with my elbows while sitting on the bike and thats something I cannot do now with the RC211V. This is helpful when you ride a race bike.

What can you say about the power delivery?

The engine character feels a little different to the RC211V, but as I said it was just my first test and development is still going on so this feeling will continue to change. And also I didnt push so much.

Yes, it seems easier to ride because some things about the bike feel smaller and the rear seat is much shorter which makes the whole bike look more compact. The bike has some characteristics which are a little more like a 250cc but its still a MotoGP bike. I dont know if it will be faster in the corners because there are many hairpins in Motegi and the corner speed is very low.

Which characteristics do you find better than the 990cc?

For me, the dimensions. Im not tall and this machine suits my size a little better than the 990cc. Even though the height and the weight are the same as the RC211V, the bike is smaller, more compact and this is good. 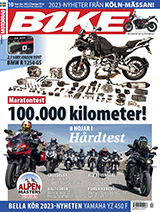